Coupling Wastewater Remediation with Production of Lipid-biofuels: Biofuels production from algae grown in treated wastewater is a viable strategy that can address both economic and environmental issues. In this regard, microalgae/cyanobacteria can grow and produce biomass rapidly, with doubling times on the order of one day or less. Additionally, microalgae can remove and sequester nutrients (phycoremediation) from wastewater, and produce biomass in a solid, harvestable form (see biorefinery below). After recovery of value-added products from algal biomass, the spent algal waste can serve as feedstock for methane and syngas production in an anaerobic digester. Despite the environmental and economic potential of algal products, however, the various stages of the process have not been well integrated. This is due, in part, to the multiple integrated stages of wastewater treatment and algal growth, and the wide range of scientific and engineering expertise needed, and includes topics as diverse as basic cultivation and strain collection, to processing and post-processing technologies. To fully realize the benefits of large-scale algal cultivation however, the growth efficiency of microalgae on wastewater must be improved and more value-added products must be obtained from the algal cultivation. To this end, this project is, a collaboration between Florida Agricultural and Mechanical University (FAMU), Georgia Institute of Technology (Georgia Tech.), and Army Research Laboratory, to bring together expertise spanning the entire bioenergy value chain, including, basic organismal biology, microbiology, molecular biology, environmental, chemical, civil and mechanical engineering, infrastructure and the social dimensions of the sustainable energy economy to obtain a comprehensive understanding of the potential for coupling phycoremediation of military wastewater and the production of next-generation biofuels and other value added products. 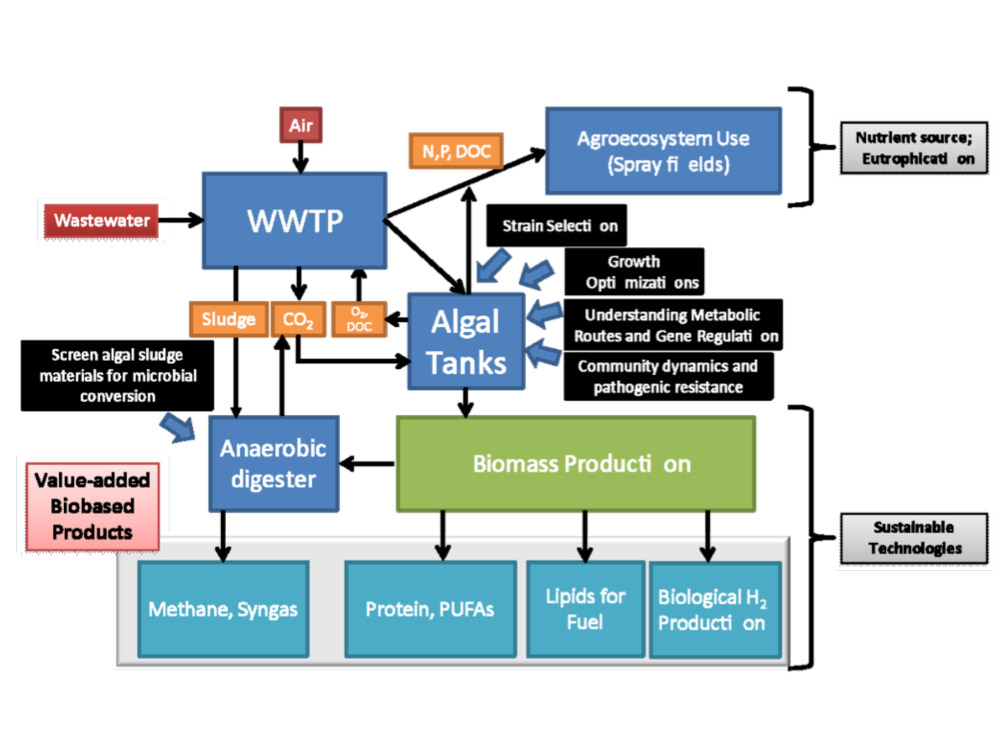 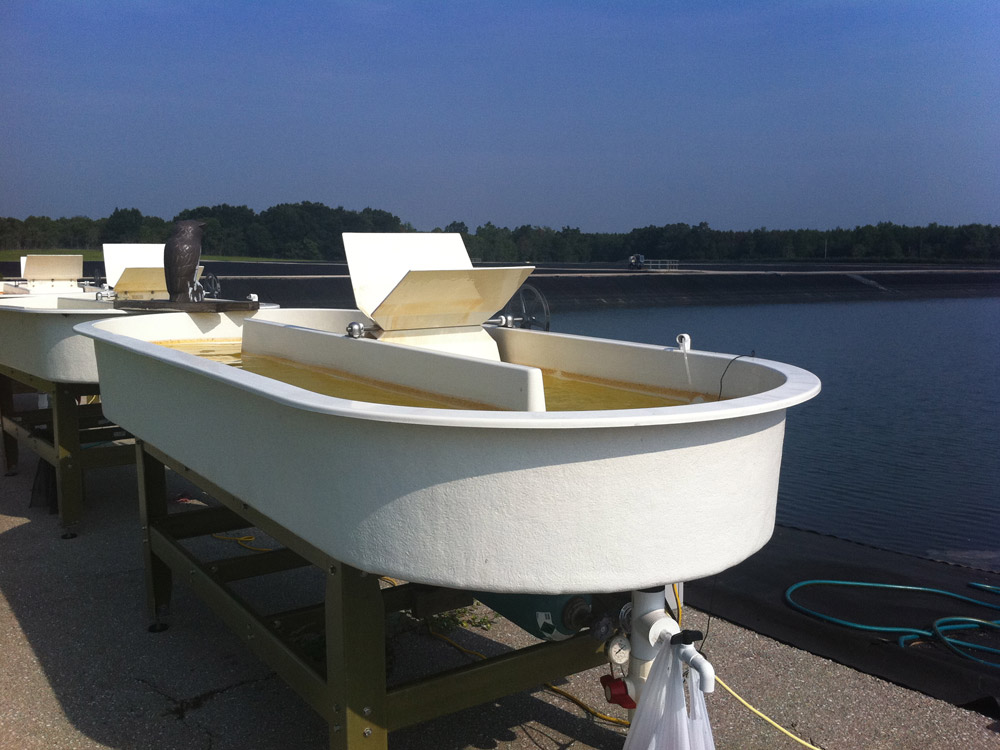 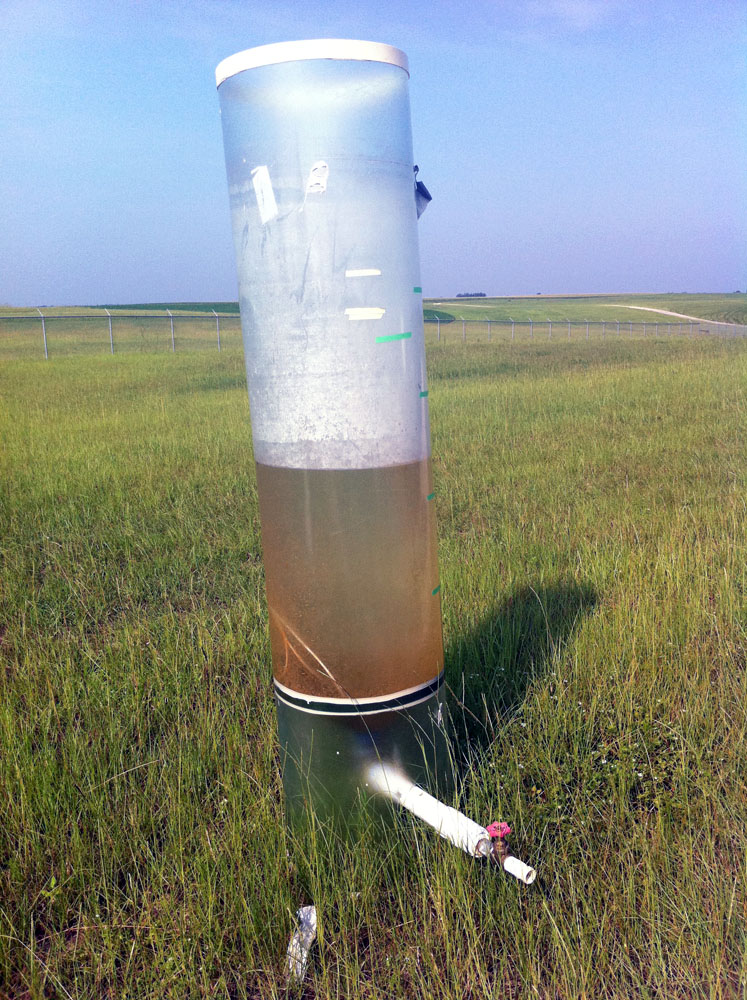 Figure 3: Scaling up of the algal biomass

We are obtaining a comprehensive understanding on coupling the growth of algae to produce bioactive compounds such as lipids. Specifically, we are interested in the following ecological questions:

(a) will microbial competition for inorganic nutrients in the open tanks limit algal growth and/or significantly reduce effluent nutrient levels?,
(b) will microbial respiration of wastewater dissolved organic carbon (DOC) and production of dissolved inorganic carbon (DIC) enhance algal growth?,
(c) will seasonal shifts in predator community structure influence algal biomass productivity in outdoor growth tanks?, and
(d) can the presence of a complex non-algal microbial community provide for ecosystem resistance to algal pathogens? Moreover, abiotic factors -such as variable inorganic carbon and nutrient (N, P) supply, presence of toxic metals, and presence of pesticides – can impact the productivity of algal ponds through direct interactions with algae and indirect effects by interaction(s) with non-algal microbial communities. Natural environmental variability of sub-tropical and tropical environments (i.e., seasonality in light and temperature) represents another major challenge to long-term, sustainable algal cultivation (Olguin 2003). These aspects of algal cultivation must be addressed in a scalable fashion to enhance the cost- and remediation effectiveness of algal technology.

Through careful consideration of our findings, we have started isolating and characterizing lipid-producing cyanobacteria and/or microalgae from the wastewater holding tanks that are used to store treated wastewater by the City of Tallahassee (Fig. 4). 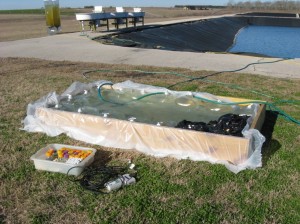 Fig. 4. Wastewater holding tanks from which we are bioprospecting lipid producing strains.

We hypothesize that the wastewater-grown organisms will have adapted to sequestration of nutrients and producing lipids better than freshwater microalgal strains that are mostly being used currently for biofuels research.

Prior to the design of an appropriate production strategies for algal biofuels, the behavior of microalgal species of interest need to be characterized under different in-situ growth conditions. To this end, fluorescence-activated cell sorting (FACS) can be very powerful technique to help analyze the physiological status of microalgae and thus, has the potential to produce rapid axenic environmental isolates. The options for implementation of FACS in the development of biotechnological processes are to sort cells to isolate those that are overproducing the target compound (in our case, lipids) or for the preparation of axenic cultures.

FACS sorted cells were transferred onto the surface of growth media in several 96 well microtiter plates. After several weeks, small cells were found growing on several wells as shown in figure 5. 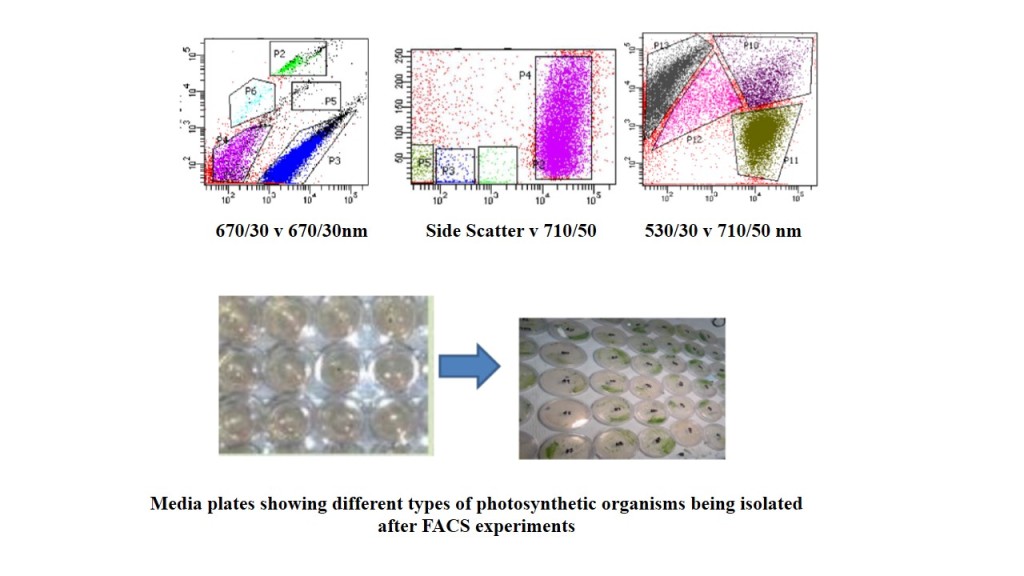 Fig. 5. Application of FACS to isolate lipid-producing strains of microalgae and cyanobacteria from wastewater holding tanks.

Genetic fingerprinting using automated ribosomal intergenic spacer analysis (ARISA): Prior to obtaining a comparison on the abilities of the isolated organisms to produce lipids, it is necessary to establish their purity. To do this, the FACS isolated organisms were further grown and nucleic acids were extracted using standard protocols. ARISA was conducted as previously described (Fechner, et al., 2010) using the universal ITS primers used for both prokaryotic and eukaryotic organisms. Figure 6 below shows the ARISA images obtained using a Bioanalyzer 2100 from Agilent. 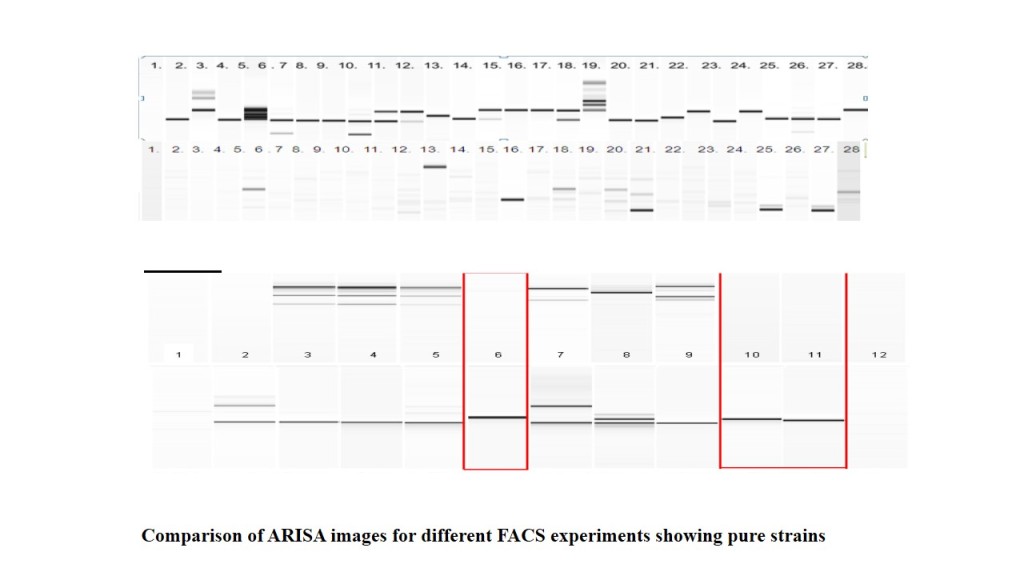 Fig. 6. Use of ARISA to identify purity of isolated strains. Overall, ARISA results showed that we obtained 6 axenic isolates.

To identify these 6 isolates, their SSU rDNA was sequenced and phylogenetic trees were constructed using MEGA software. As shown in figure 7, we found that isolate SG_UK-2234C- FACS1 clustered with Mychonastes, SG_UK-2234C- FACS1 isolate clustered with Acutodesmus/ Scenedesmus clade. All the FACS3 isolates were taxonomically closer to the Acutodesmus/ Scenedesmus lineage but appear to be taxonomically distinct and are likely previously undescribed microalgae. 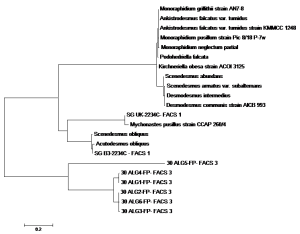 As shown in figure 8, we were also able to isolate a cyanobacteria (strain SGAC1) from the wastewater holding tanks that clusters closely with the genus Cyanothece, which includes unicellular cyanobacteria that can fix atmospheric nitrogen. Cyanothece is one of the most potent diazotrophs characterized and the first to be completely sequenced (Welsh et al., 2008). Studies have shown that this strain can fix atmospheric nitrogen at rates higher than many filamentous cyanobacteria and also accommodate the biochemically incompatible processes of photosynthesis and nitrogen fixation within the same cell by temporally separating them.

Strain characterization/ selection: Our next task will be to compare the isolated strains for their abilities to produce lipid and sequester nutrients when grown in an artificially defined media (Chu10) vs. secondary treated wastewater.

Seasonal variability: The candidate specie(s) will be grown in the pilot scale open raceway ponds over an annual cycle to measure growth, lipid production and any bottlenecks will be addressed.

Anaerobic digestion to produce methane: A major aspect of this research is to test the viability of the candidate specie(s) as an anaerobic digestion feed stock. The following pretreatments will be performed prior to introduction of the feed stock in anoxic bottle microcosm experiments: lipid extracted cells, protein extracted cells, as well as biomass with both lipids and proteins extracted. We will also compare how much methane can be produced without extracting these products. Gases that will be measured by GCMS at the Chauhan lab include CO2, CH4, H2 etc.

In addition, we have recently initiated a new partnership with the National Renewable Energy Laboratory in Golden, Colorado. We will further strengthen our partnership with NREL with the hope of obtaining a comprehensive understanding on algal/cyanobacterial biofuels program specifically designed for a sustainable algae production for the State of Florida. We will also partner with the Arizona Center for Algae Technology and Innovation (AZCATI) (http://asulightworks.com/solutions/sustainable-algal-biofuels-consortium) to incorporate lessons they have learned for sustainable algal farming and apply it to the Floridian infrastructure. 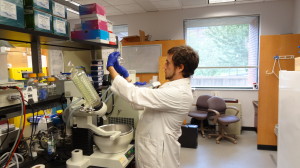 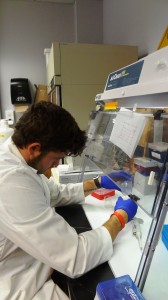